Pakistani food is rich, packed full of spice, generous with ghee, and incredibly tasty and at the same time this cuisine is lesser-known food of the subcontinent and is rich in tradition, full of wonderful and various dishes.

Pakistan’s cuisine has developed over the past 80 years after its independence in 1947 and its cuisine incorporates elements from its neighboring countries like India, Afghanistan, and Iran. These varied regions have also a wide range of different foods.

This amalgamation of different cultures makes Pakistan one of the most famous countries around the world when it comes to food. Every place in Pakistan has its own unique food. From Karachi a southern part of Pakistan to Gilgit-Baltistan a northern part, every place has its own unique culture and tradition. With this beautiful diversity comes a unique type of food.

Food is with the people of Pakistan and it is the most favorite thing of people of Pakistan. In Pakistan where ever you go, you will find delicious new dishes that will make someone mouthwatering over that food. The best thing is that you can get anything you want to eat and you will find it almost everywhere no matter the time. If it is after midnight, no worries you will still find someplace to find your belly with amazing food.

Pakistan every major city is known for its dishes and some of the dishes are special enough that you remember the city name with its food items like Karachi is known for its Biryani and Nihari. Apart from cities, villages have their own food culture and villages host the majority of the population of Pakistan. To be honest the food culture in Pakistan is so deep and vast that it would take us an eternity to explore every bit of it.

Nihari history dates back to Old Delhi when Mughals of the subcontinent made their contribution to the cuisine of India, which makes it one of the biggest milestones in Indian culinary history. Nihari is stew based dish and it is made by slow-cooking meat along with the bone barrow. Nihari was the famous cuisine of the subcontinent and mostly it was taken in breakfast with Khameeri roti. 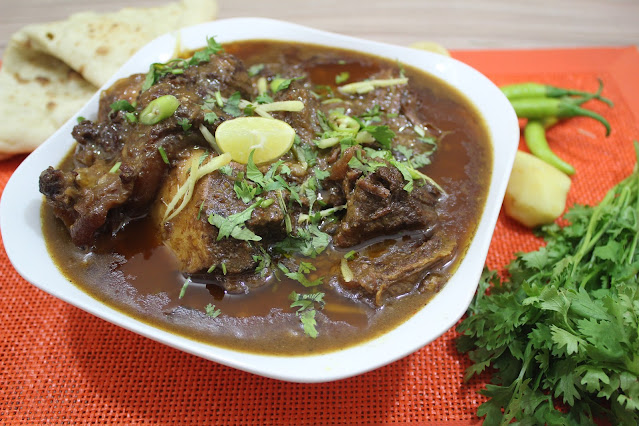 Nihari is prepared with lots of dry spices, cooked in vegetable oil and animal fat.  Beef Shank is used for Nihari with a very healthy portion of Home-Made Desi Ghee. The slow cooking stew is then stirred altogether in a huge pot. The consistency of Nihari is exuding and thick. The ultra-tender meat chunks literally floating in desi ghee. It has a deep red color from the spice used and infused ghee and oil.

So, how to make Nihari, and if you are planning to cook Nihari for today’s dinner, here is are the ingredients and the best way to cook this delicious dish.

First of all heat 1¼ cup of oil and cook meat evenly on high heat for a few minutes and add masala 1 ingredients to the meat, with the exception of flour and cook on high heat until the meat is evenly coated.Add 10 glasses of water to the meat, then dissolve flour in four glasses of water and add to the meat, ensuring that the meat is completely immersed in the water, add more if required and bring to boil.Add finely powdered nihari masala 2 to the boiling mix. Lower the heat to medium and let it boil for six to seven hours. Fry the onions until golden brown, then add to the Nihari and cook for another 15 to 20 minutes.

Garnish and serve with hot naan.

BUTTER CHICKEN OR CHICKEN MAKHNI WHAT TO CALL EXACTLY? LET’S…

TALES OF LAHORI FOOD  Lahori Food – If you are…